SM/IDX: What counts as a social media platform?

I proposed back on November 18 that we should have an open discussion about social media and IDX. Enough folks responded here and on Facebook, etc., that they’d like to see the discussion.

In later posts, we’ll discuss the ways in which brokers might use or want to use social media with each other’s listings. I also want to discuss comments that Mike Wurzer has made here and on his blog about the value of proper license agreements (comments that I generally strongly support), but I still think we need to figure out first what we are talking about when we say “social media.” This question is a bit harder to answer than you might think. Wikipedia (the oracle that knows, or at least claims to know, all) offers this introduction to its article:

The term Social Media refers to the use of web-based and mobile technologies to turn communication into an interactive dialogue. Andreas Kaplan and Michael Haenlein define social media as “a group of Internet-based applications that build on the ideological and technological foundations of Web 2.0, and that allow the creation and exchange of user-generated content.” Social media are media for social interaction, as a superset beyond social communication. Enabled by ubiquitously accessible and scalable communication techniques, social media substantially change the way of communication between organizations, communities, as well as individuals.

I don’t find this particularly helpful. What I’d like is a definition that would help me identify an instance of social media and distinguish it from something that is not social media. I’ve reviewed what seems like a hundred definitions, and none of them quite does it for me. (You can see a sample of 30 definitions on Heidi Cohen’s blog).

Most of the definitions (like the Wikipedia one) refer to vague principles and movements. I’d like to try to identify the things that seem to be common to the definitions I’ve reviewed that might be useful for categorizing something as social media (or not). I think a couple characteristics might matter: the technology/delivery of the platform; who operates the platform; content the platform provides; content the user/visitor provides; and interactions among users/visitors.

Technology/delivery of the SM platform

A threshold question is what technologies we want included in our definition. After all, my high school yearbook was a social medium: I asked friends to sign it, and they made comments to me, but they often put comments on each other’s ‘posts.’ I’m proposing that we include platforms available via web-sites and on mobile devices. I’ll use “mobile devices” to refer to mobile phones and tablet computers such as iPad. Note that there are no bright boundaries between “tablet,” “netbook,” and “laptop,” so for the moment I’m going to assume social media can be delivered via any device that can connect to the Internet or SMS networks that has a human-readable display. A social media platform can use more than one delivery technology, such as web site and Android app. Please comment if you think this is too broad.

Based on the examples I cite below, including Twitter, Spotify, WAZE, and Zillow, I don’t think we can say that only certain kinds of companies operate social media platforms. I wonder whether a brokerage firm couldn’t operate a social media site? If you say ‘no,’ please explain why. Maybe it’s the content on SM platforms that distinguishes them?

The operator of a social media platform may or may not provide content of its own on the platform. So, for example, Facebook offers very little content, but provides a framework for users to do so. (I’ll refer to “visitor” and “user” interchangeably where I mean a person who visits an SM website or uses an SM app.) Facebook does provide, or rather, allows advertisers to provide, advertising for sponsored products, etc. On the other end of the spectrum is a service like Spotify: it provides a huge portfolio of music content. In the middle is a platform like TripAdvisor.com, which allows visitors to supply much of the content but which links to services where visitors can reserve hotels and restaurants.

It seems that the sine qua non of an SM platform is that the visitors can contribute content visible to other visitors. This is sometimes called “user-generated content” or “UGC.” Such sharing is not required on most sites, however, and it’s generally possible to lurk on a social media site without sharing content and even without having an account on the site. In the latter case, the content available to an unregistered/un-logged-in visitor is usually, but not always, curtailed. Sharing takes three major forms: linking, commentary, and checking in, and they can be recursively applied.

Commentary. Commentary is a statement of view, opinion, or response to something. This blog post is a lengthy instance of commentary; the comments which hopefully others are adding to it are also commentary. You can also post directly to your own Facebook wall with a comment. See the example I posted on my Facebook page.

Most Tweets that do not include links are also forms of commentary. See the example here.

But note that commentary can be associated with links, too. So, for example, a Tweet might include a link and a comment by the person tweeting. Here is an example.

Checking in. Some social media sites allow you to “check in” or otherwise indicate that you were present there or took some other kind of action without you actually contributing content in the form of commentary, photos, or links. See this example of a restaurant listing from Yelp’s iPhone app. 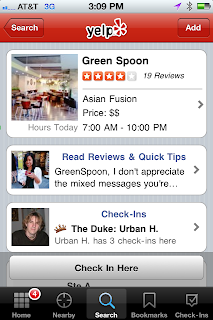 Note the button at the bottom that allows a checkin. There are other kinds of automatic posts you can do. So, for example, if I share a bottle of wine from our ‘wine cellar’ (a rack in our kitchen pantry) and write comments about it on the Cor.kz app on my iPhone, I have the option to have my comments automatically appear on Facebook. The same with listening to a playlist on Spotify: 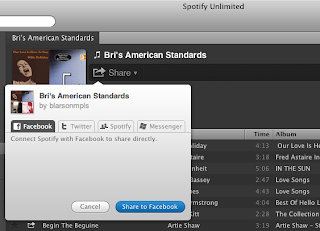 All these types of UGC can be used in complicated ways and iteratively. For example, here is a screen shot from Waze, a community-driven GPS service with an iPad app.

The little buttons in lower right and lower level allow me to check in as being at a particular spot, but they also permit me to report an accident or a speed trap. These reports are more or less formulaic. But I can also choose to “chit chat” with other Waze users. (Hopefully, none of us are actually driving at this point.)

SM platforms also vary in the amount of user sharing that is actually possible through the platform. Sharing links from outside of Facebook is a central activity on Facebook. On Spotify, on the other hand, the sharing is predominantly a sharing of tracks or playlists to Facebook or Twitter though you can share with another Spotify user. See the example of my effort to share on Spotify above.

I expect that everyone will agree that in order for us to class a site as a “social media” platform, visitors must be able to contribute some kind of content; but whether the site operator provides content is not a defining characteristic of social media. Thus user-generated content seems to be a necessary but not sufficient condition for a platform to function as social media. I think there must also be the possibility for interaction among users.

Interaction with other users

The sharing of UGC on an SM platform can be one-to-one or one-to-many. For example, you can share a link in Facebook by messaging a single friend, or you can share it with the whole Facebook community (and the web). But it seems to me that every social media platform provides a means for the visitors/users to interact with each other as well as the platform operator. The most limited example is probably a blog like this. If you read the comments for a post, you may note commenters referring to each other in their comments. The interactivity is much richer on sites like Facebook, of course. See the responses I got from my ‘test’ Facebook status above: 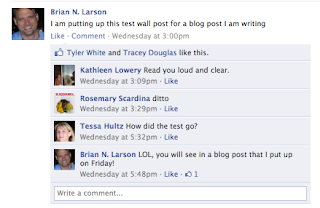 So what is a social media platform (and what is not)?

This is a key question, as the proposed NAR policy would permit listings to be shared in “social media.” If we don’t know what SM is, how can we know whether someone is sharing stuff there appropriately? I argue that social media platforms must allow user-generated content and interaction among users/visitors. Other than that, I can’t see any distinguishing characteristics. Can you?

The question is important. If we want to limit listings to being put on only certain kinds of social media, we ought to be able to distinguish them from each other, right? So here are some questions and examples.

Are blogs social media if they accept comments? What about if they don’t? Is this blog social media?

Is Zillow a social media site? Zillow provides a Q&A platform on its site: 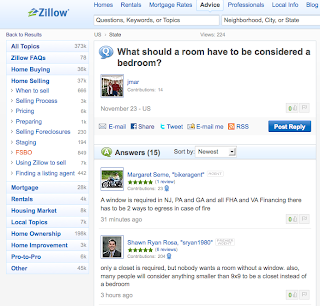 Looks like UGC with an opportunity to interact with other users to me. Social media?

How about PostSecret.com? You write a secret on a postcard, mail it to the PostSecret folks (yes, via snail mail!) and they post it on their site. Definitely UGC, but it appears a little difficult to interact with other users. Not social media? Can you offer some additional characteristics or examples? Let’s have a discussion here (in the comments) and then I’ll try to distill the thinking into a definition for your approval in a later post.